After what may have been the closest race in the Fantasy Film League so far, we can now officially crown a winner! Jordan has broken Scott’s back to back winning streak and is now the 2016 Regular Season Champion!

Jordan dominated both the Box Office and Profit Margin categories with Disney’s Finding Dory and Jungle Book putting up huge numbers in both categories. Scott narrowly beat Jordan in the IMDb Score and RadScore categories, only taking the RadScore category by only a tenth of a point. The race for the win came down to Rotten Tomatoes score. With Jason Bourne and Suicide Squad locking in with rather “rotten” scores, the window of opportunity opened up for Jordan. Pete’s Dragon and Southside with You both came in with great scores and Jordan won the category and the season by 19 points from Rotten Tomatoes! Congratulations, Jordan!

The end of the Regular Season also means the start of the Playoffs Season. To find out the 2016 Playoffs draft results in detail, download the latest episode of Rad Notions Radio on iTunes or check out the Team Rosters featured on this here website.

Only 2 days after podcasting, the first film from the Playoffs Season was released. Scott’s film, The Light Between Oceans, opened in 1500 theaters on Friday the 2nd. Over the holiday weekend, Light Between Oceans came in 6th in the box office with slightly over $6 million. While that may be a good haul for a small film, its still got a way to go before it recoups its $20 million budget. The numbers may not be as stellar as Scott had hoped, it was his 10th and last draft.

That should get us up caught up to speed. Stay tuned for more updates here and be sure to check out the next episode of Rad Notions Radio for the first review of the Playoffs Season!

It’s been nearly a month since our last update and we’ve had another 3 films release. With the guys both taking some summer vacations, it has been a few weeks since our last podcast and seemed appropriate to do and quick recap on the Fantasy Film League.

Captain Fantastic: As all our Wild Card picks do, Scott’s second Wild Card film opened to a limited release last weekend. Only opening in 36 theaters, the Viggo Mortensen film took in slightly over $125 thousand. Not a huge take for the limited release, however, the film was locked in with a 79% on Rotten Tomatoes and an 8.1 on IMDb. Overall, decent numbers yet still not the numbers Scott needs if he is going to take control of this season.

The BFG: Spielberg’s latest film opened two weekends ago at the #4 spot in the box office. Competing against Finding Dory and fairly average scores (71% on RT and 7.2 on IMDb), the BFG had fairly mediocre box office numbers. Only taking in $22 million opening weekend, the Roald Dahl adaptation has only totaled $43 so far. With a budget of $140 million, the BFG is certainly not putting up the numbers Scott expected or hoped for.

Independence Day: Resurgence: The long-awaited sequel to the classic alien-disaster film opened to pretty disappointing response from the critics. Receiving a Rotten Tomatoes score of 34% and an IMDb User score of 5.8, Jordan wasn’t any happier with the box office as Resurgence has only made $95 million so far.

Finding Dory: The latest Pixar film dominated the box office for 3 weeks, bringing its total box office to over $430 million and its profit margin to 117% (highest of the season so far).

The films Everybody Wants Some!, Keanu, Midnight Special and Batman v. Superman have all exited their theatrical release and their scoreboard numbers are officially locked in. Other films released this season are still available in theaters and are gaining in the box office by rather insignificant amounts (not worthy of updating here).

Currently, Jordan is winning the 2016 Regular Season with 3 categories (Box Office, Profit Margin, and RadScore). Both Jordan and Scott still have 3 movies left to release within the final month and a half of the season so its still anyone’s game.

Tune in this week to see if Jordan and Scott think Spielberg still has his mojo and discuss whether or not Independence Day: Resurgence was anything more than a cash-grab. 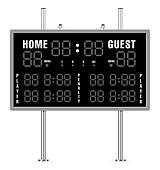